While I was looking out at the Santa Monica pier, a couple stood behind me with 2 bikes, shiny new bikes, packed down with all the essentials for a long journey. I started talking to them for a few minutes, where they were from and where they were headed. Turns out it was the very first day of their journey north to Canada! I was intreaged and very curious as to how much their setup must have cost. It turns out it is quite affordable to travel by bicycle. I have had a friend trying to convince me to ride through south America on a bike, but I was not ready for that. It sounded extreme. How ever, from that moment on I got it stuck in my head that I was going to ride through Europe on a bike.

That evening I looked online to see any second hand bikes with panniers and within a few minutes I found one just north of London. (Pretty much how I make all of my decisions these days) So there you go, I’ll start riding through the UK! I must admit I made this decision whilst in a place where it was 30 degrees during winter and almost never rained.  How ever I’m always up for a challenge.

So I caught the train up to Lincoln with a couple of shopping bags with clothes, a sleeping bag and a tent. I arrived at the mans house in the late evening, bought the bike, put my stuff in the panniers and I was off!! The man I bought the bike off had owned the bike since the 60’s and had taken such great care of it! I cycled off down the road in the brisk cool air of an England in spring, a huge smile on my face, pregnant with anticipation, angst, and excitement for what was to come. I was about to embark on something slightly ludicrous and like nothing I had done before. Shortly after buying the bike I was struggling to find a place to camp up on the side of the road, after I was feeling very tired at about 11pm I decided to set up in someones front lawn, unbeknown to them. That first night was the actual worst. I didn’t have a sleeping mat as I didn’t get a chance to buy one yet, so I was shivering in my sleeping bag on the dampo ground in my little tent, tossing and turning on the freezing wet ground. I managed to get a couple of hours sleep before packing up the tent at 5 am and hitting the road before anyone saw me.

There was an actual frost that night! The grass outside was crunchy and the air was bitterly cold! You can imagine the thoughts that were flowing through my head, I was not ready for a couple of months like this. I started heading west to Sheffield, my original plan was to cycle through Sheffield and on to Manchester in one day, about 70 miles or so, still trying to figure out a realistic mile goal for each day. I got lost and frustrated as I tried to cycle along the many cycle routes through farm lands, off road tracks and the likes. With my heavy bike it seemed like an impossible task! Around 12 noon time I started to feel a bit dizzy and faint, it was at this time I realised that I had forgotten something quite important. Food. Yes, I know.. it’s the basics of being a human being, but I was so caught up in the excitement of the trip that I forgot to eat in the last 24 hours! Fortunately, I found a small village selling some food close by and managed to fill myself up with some nutritious grub before continuing on.

Fast forward 2 weeks, and I managed to make it to the top of Scotland! I cycled through Manchester, Lancaster, Lake district, Dumfries, Glasgow, Edinburgh, Perth, Inverness and right up to the top in John O Groats. It took 12 days from Lincoln which was a bit faster than I expected to travel, but I had the need for speed! I did some couch surfing along the way and met some very friendly and hospitable people along the journey. I want to say a huge thank you to all of you although you may never read this. Scotland was an incredibly beautiful country and reminded me constantly of being back home in New Zealand. So many of the streets were lined with daffodils brightening up the towns and villages. While gumby lambs frolicked around in the fields learning to run with their brothers and sisters. The mountains with their snow caped peaks lined the roads as I rode through the centre of Scotland, towering high in the clouds, it was a beautiful sight to see.

Manchester was an amazing city with it’s ancient buildings in the city center, it had more of a grungy vibe which I loved. It has been the birth place of so many musicians such as 10cc, Morrissey from the Smiths, the Gallagher brothers from Oasis, the Chemical Brothers, Simply Red the list goes on!

It was definitely lambing season as every field I passed I could hear the merry cries of young lambs skittling about on their gumby legs, ravenously attacking their mums tit every half hour. 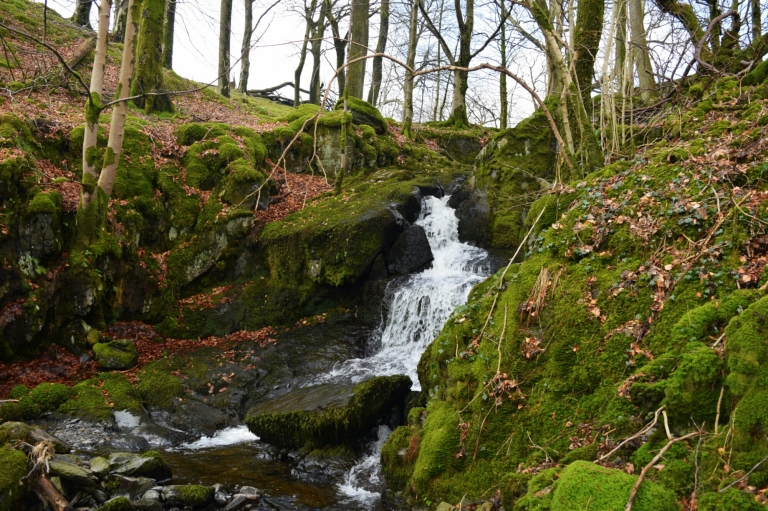 The lake district was purely phenomenal, everywhere you looked were beautiful grassy hills, waterfalls, trees and lakes. I couldn’t take too many photos as there was just too much to see. You have to go yourselves.

Crossing the border into Scotland was a big moment as you can see by my face I was pretty stoked and soaked actually. The UK has pitiful rain that is more like a wet haze that hangs around for a day or two.

This incredible feat of engineering was seen as I rode along the canals of Scotland, as there are many different water levels there, you can pass dozens of locks along the way. This one how ever was particularly impressive. As you can see there is a 24 metre difference in height here. This is the Falkirk wheel which opened in 2002, I watched a boat being raised up from the bottom level as I stood there. 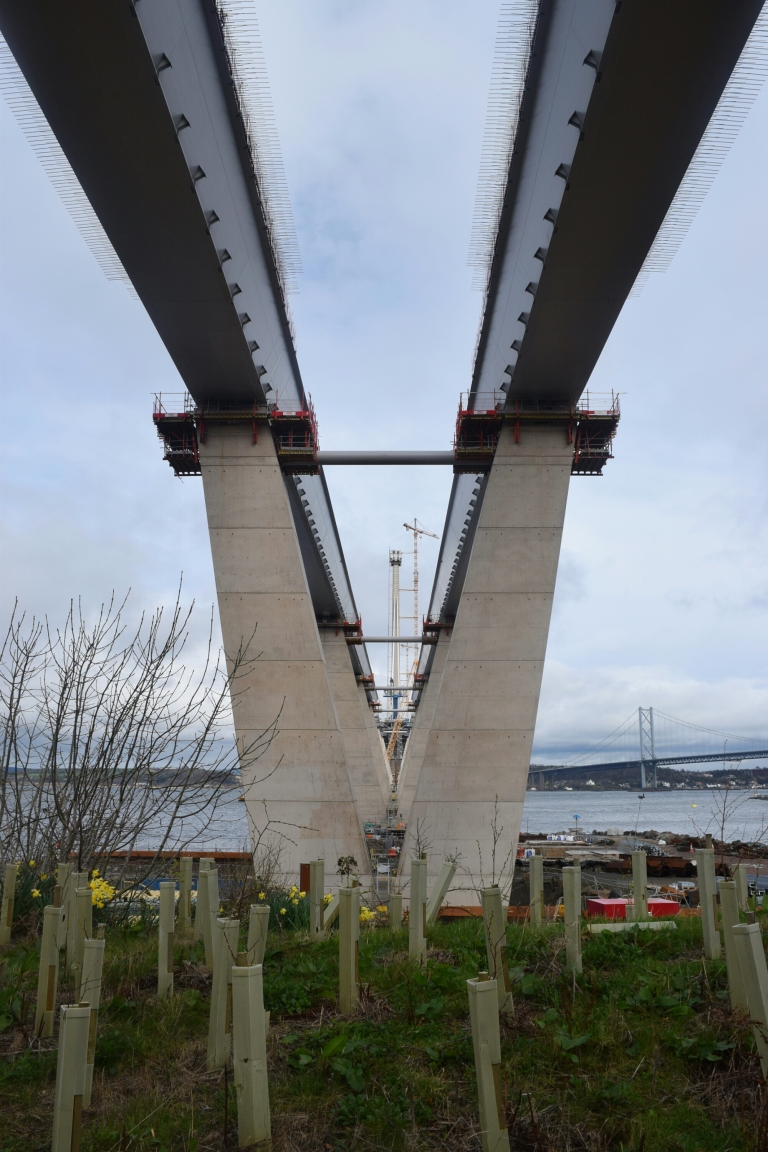 A bridge under construction close to Edinburgh

The Edinburgh castle, I must say that Edinburgh was absolutely amazing, the buildings and the layout of the town was very impressive.

The same bridge at sunset

The road between Edinburgh and Inverness was truly magnificent, I hardly noticed the thousands of feet I had to climb on this bike because the view was so spectacular. 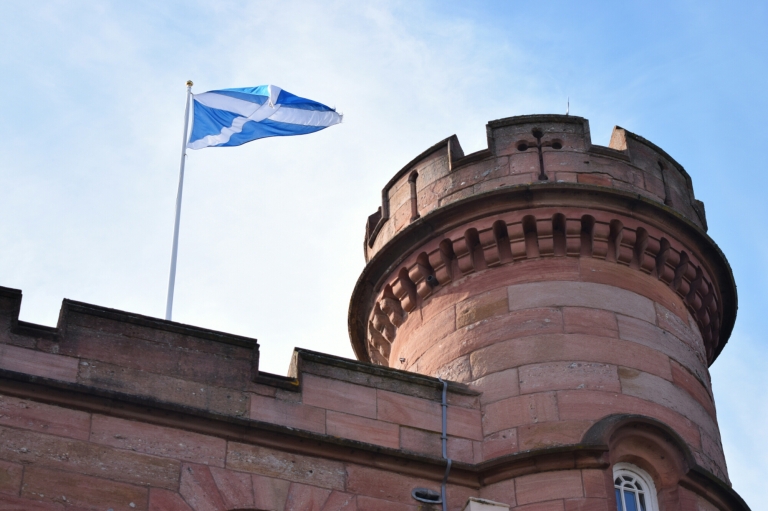 The top of the world! Well north enough for me! I got a new understanding of the concept of wind while riding through the north of Scotland, I have ridden bikes plenty in the past but it was an entirely new element on my 1960’s steel framed bike which with the bags weighs about the same as a motorbike. As I climbed the hills in the north of Scotland, some days my legs had had enough! It felt like a 4 year old child was hanging on to the back of my bike dragging his feet along the ground, an actual mission. And getting to the top of the hill I would prepare myself mentally for the beautiful glide down appreciating the benefits of gravity when suddenly I would be hit by what felt like hurricane force winds slowing me down and making my journey down the hill feel like I was climbing the hill all over again. Bear in mind my bike has the aerodynamics of a hiace van, and I would always seem to have a head wind. I have not yet managed to be going the appropriate direction to reap the sweet benefits of a tail wind. Ces’t la vie

The benefit of free camping, (which is what I have done most of my journey) is that I can pretty much camp up where ever I damn well feel. And I have had some pretty impressive views when I open my tent flap in the mornings!

My next stop is Ireland, a place I have wanted to see for a long time. The Irish people I have met throughout my life have been extremely friendly and a lot of fun. And that accent, it’s the best ever!

A quick update, I have mapped my route on this website so you have a visual of most of where I went, it’s not 100% but you get the general gist. It was around 1000km to the top!

3 thoughts on “Cycle through the UK and Ireland you say??”