After a couple of days of relaxing on beaches and experiencing some Lisbon night life, Ian and I headed towards the festival that had brought us all to Lisbon. Nos Alive. It was a mix of electronic, old school, folk and a bit of hip hop.  To be honest when I bought my ticket I really only knew a couple of names. The Chemical Brothers were a big draw card for me, but more so was to enjoy the summer with some friends at a music festival, what more could one wish for?!

The bus trip there was.. uncomfortable to say the least, around 40 degrees in that moving greenhouse, and when I say moving that is a generous adjective as it was barely crawling through the streets. We arrived at the campsite where we were to spend the next 3 nights along with 2000 other festival goers, I was in my element. It felt like I was at a budget version of burning man with all these hippy looking, no shirt wearing people with their tents. We were the first to arrive and due to Lisbons shocking public transport everyone else was delayed. Thankfully the campsite had a swimming pool equipped with a DJ (ofcourse) so we got to enjoy the sun and scenery and also to take our team mascot (Bruce the shark) for his first water experience.  It wasn’t until 8pm when we all managed to meet up together atlast. Kathryn was the last to get there after being an absolute champion carrying my backpack all the way from London with about 10kg of my stuff. After a solid feed of pasta to keep us going for the night we were off to the festival.

Within about an hour we had gone from 8 to 6 people whilst watching Robert Plant. Without cellphones we all felt a bit naked, growing up in an Era with technology has made us a bit too dependant. Not long after we were down to 4 or if you were the ones lost down to 2. As I didn’t know many of the artists there I was just enjoying the sounds pumping from the various stages around the festival grounds. The Chemical brothers were playing at 1am so we all stayed to watch them amongst an enormous crowd, I was immediately taken back to 10 years previous when they opened with “Hey boy, hey girl”. The lasers, the smoke machines working over time, the on screen graphics, it was all very well done. We were all back at the campsite around 4 I woke up for a bit and realized that in the campsite there was a DJ playing loudly at 4.30 in the morning! 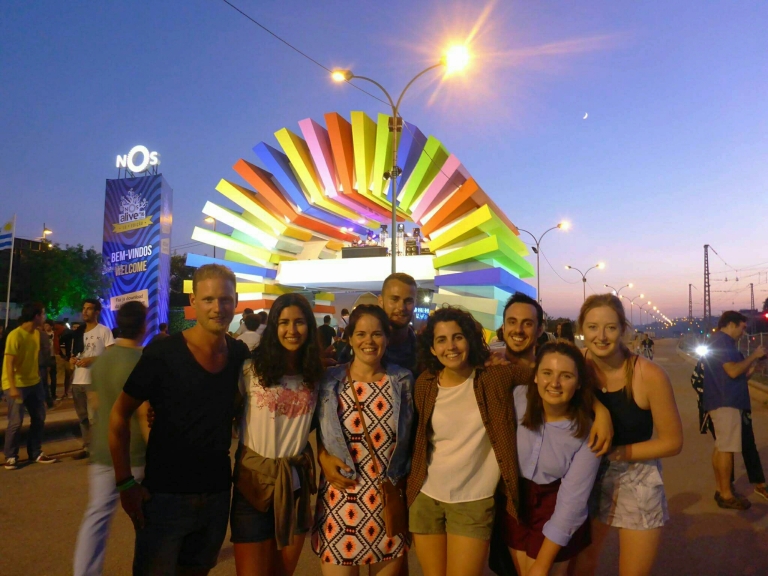 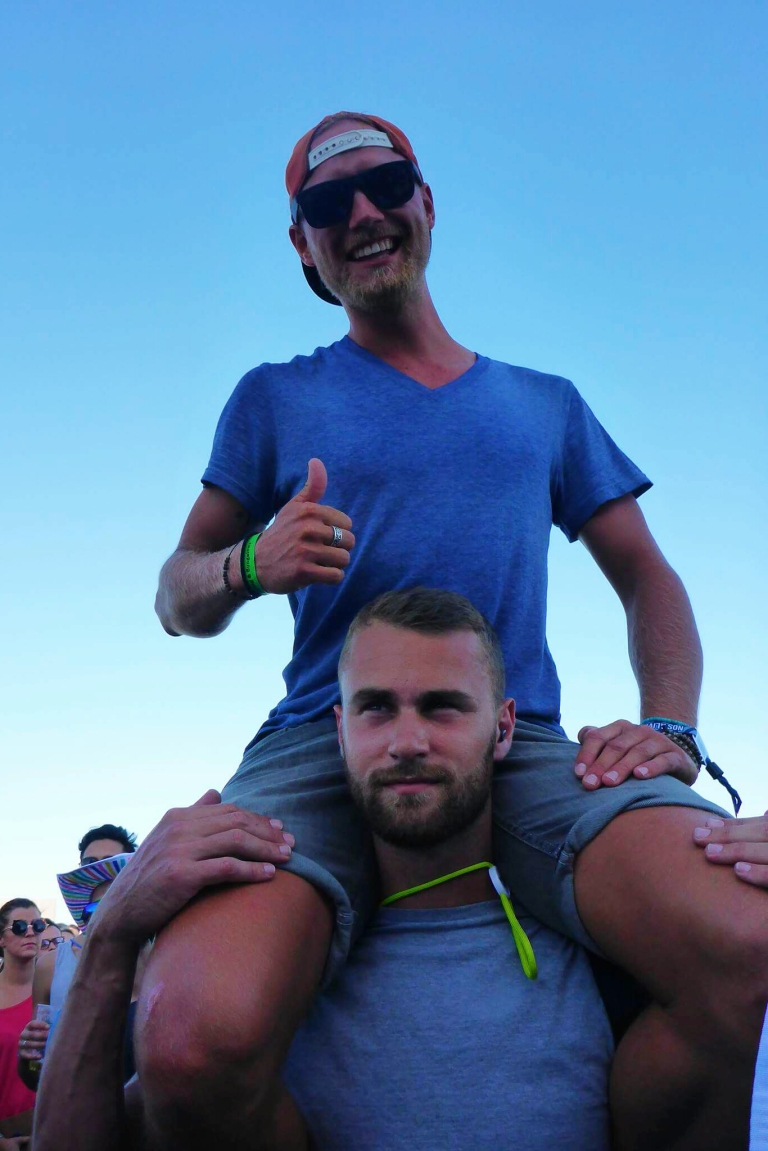 Day 2
We all got up and out of bed around 8 am as the heat of the day was not keen for a sleep in. The pool was very inviting in the morning so a few of us went off for a dip. The day seemed to fly by with ease and it wasn’t long before we had to prepare ourselves for the nights festivities. This evening we decided to take our team mascot as he would help us find each other in the hectic crowds. Years and Years were kicking off the nights events, I had never heard of them before but damn they had some good energy. Their front man Olly Alexander looked like he was having a good old time up on stage.
The next big band to play was Tame Impala a group I only started listening to 6 months ago but was loving and greatly anticipating their show, we all pushed out way into the crowed, Bruce held high above the masses to be our beacon to the whole group so we could find each other. Tame impala absolutely rocked the place, the crowed went nuts, the music seemed to induce good vibes and a lot of nudity. The audience was filmed and projected on the big screens by the stage and Carley and Bruce managed to get 5 seconds of fame on the large screen to all of our delight.
Father John Misty was also playing at the same time so after Tame Impala finished we went off to see the eccentric character that is Father John as he spasmed and convulsed on stage, quite a performance.
Radio head was the last band of the night that I knew a few songs from but after a few songs we realized the band was only playing their new album which I had never heard so it was an early night for me.

There you can see Bruce from a far

Day 3
We were determined to get to the beach today, Lisbon has some amazing beaches and many of the people in our group had not yet been, so we missioned out to Cascais to enjoy the sun and water, another perfect day, I’m not sure we saw a cloud that week. We enjoyed some good food in a local restaurant before meandering back to the station to get ready for another night of music.
Jose Gonzalez was on the list as the first of the night that I knew, you might know some of his music from the epic film The secret life of Walter Mitty, he was amazing as was to be expected, his guitar skills and vocals were so clear and powerful it had everyone in the crowd swaying to his melodies.
Arcade Fire were up next, another band with amazing energy, they drew quite a crowd Bruce was definitely on beacon duty that night guiding us through the masses to meet up towards the front. The songs induced amazing crowed participation everyone singing along at the top of their lungs, I only knew one song of theirs and fortunately they played it as their closing song. We headed over to another stage that had 2 DJ’s cranking some funky tunes and danced the next hour away it makes a huge difference actually having the space to be able to dance after being squashed in a crowd. It was a good way to end the night for me, a few people stayed on to see Grimes do their thing, it was also where Brucy was let free from us to enjoy an epic crowd surfing session which I’m told was filmed and put up on the screen for quite some time during the show. It was sad to see him go! 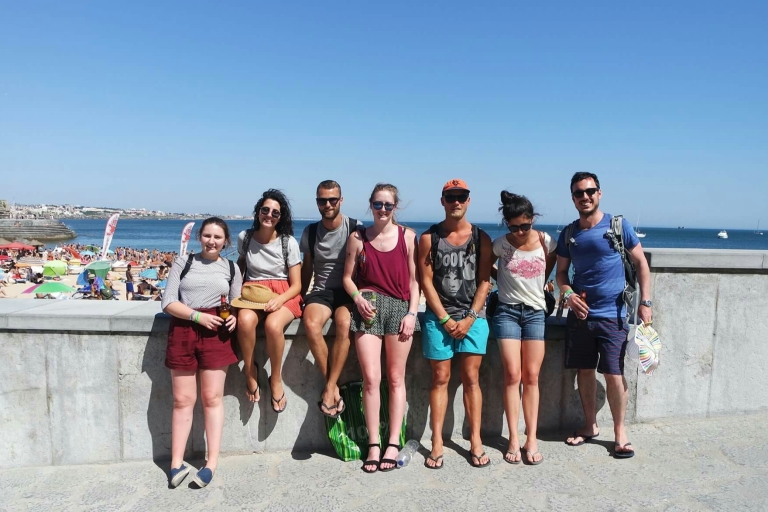 I loved that shark. 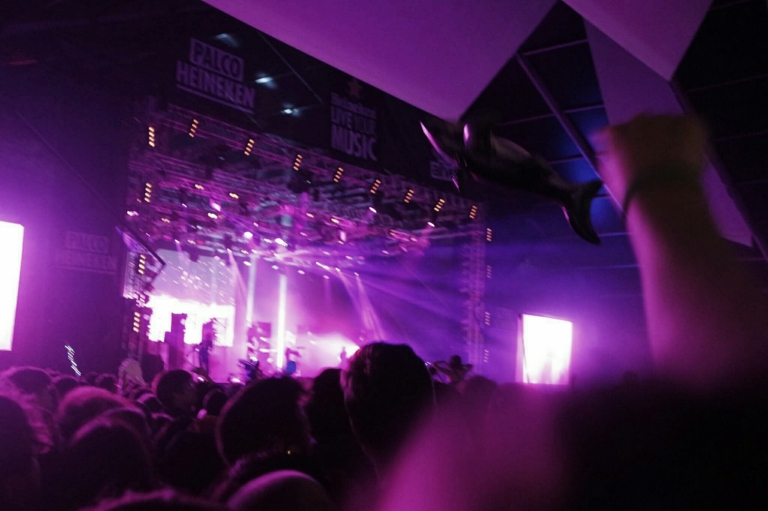 Bruce getting sweet airtime above the masses

The next morning Carley, Thea and Chris had to leave bright and early with only a couple of hours sleep, champions to be able to find the energy to do so, while the rest of us lazily bummed around by the pool for a few hours before packing up and heading off to our hostels in Lisbon.
It was the Euro cup final that night so we had to be in town to see it. Portugal vs France, they had a huge screen set up as I said in the previous blog so we went to watch the game there. The air was tense as the scores remained 0-0 at the 90 minute mark, overtime was added and Portugal managed to put a powerful kick into the goal which sent the crowd absolutely spastic! People lost their minds over this goal that was sure to win them the cup if they could only defend the French for a few more minutes. At the full time whistle Portugal had won the match and the place was electric, people were dancing and hugging screaming and blowing annoying as hell horns. We decided to stick around and watch the chaos for a while. Some unfortunate drivers thought it would be a good idea to drive past the fan zone in their cars (why the roads weren’t blocked off I’ll never know) fans jumped on the cars passing by as many as 20 people all jumping and dancing a top of moving vehicles, the drivers and passengers inside freaking out (naturally while the roof of their car was caving in above their heads) were breaking and accelerating erraticly in an effort to rid their car of these hoodlums, now.. watching on, this looked unbelievable, like something you see on TV, third world almost and I kind of viewed it like this as in.. nothing could go wrong. That was until a lady got hit by the car that was speeding and breaking. I immediately snapped back to reality and ran over to the lady to pick her up off the road, I think she was alright just a bit shaken up, the mob wanted to beat up the driver now who was probably quite literally pissing himself before managing to speed away through the crowd. This continued on afterwards, more cars came and were danced on, another girl got hit by a car, it was madness!

They had some pumping tunes playing out from the stage were the football had been playing and the large crowd of fans was still strong now all moshing and having a good time, it was like Nos day 4 up in there.

Ian and I were up early the next day to hire some scooters (yeah I know I know) to ride around the coast with Maddy and Kathryn. Another stellar day we got out to Sintra to see the sights there. Some beautiful castles and beaches with a fair amount of wind in places, it was like something out of a fairy tale. The old castles and the gardens surrounding them we could have spent another day exploring, but it was getting cold in the evening so had to call it a day. Everyone was off in the morning so it was also farewell I had an amazing time with this group of good people and I’m so glad I got to share some time with them.

I headed off to see more of Portugal but I’ll tell you all about it in the next update! Stay tuned.