We are now in day 5 of our motorcycle journey. We decided to head south to the southern most city. I had my mind set on making it to the southern most tip but due to motor cycle troubles we spent many hours in bike shops fixing our little Honda Wins. With that 100cc of power sometimes it is hard to contain ourselves.  The roads here are not too bad, every time you get to a bridge, (which is very common around the Mekong delta) the road sort of turns into a motor cross ramp, where if you aren’t careful you get some decent air time!
The road mainly just has bikes on it, even in the country, there are a few buses and trucks but definitely not many. They have a designated hi way just for cars and trucks in some areas so that keeps the other roads pretty free.

While we were in Australia we bought cardo head sets for our helmets so we can call each other and keep in contact. With a range of about 800 meters if there is no interference. They have saved us many times in the city when we get lost in a pile of 40 bikes. But the best thing about them is a connection to your phone where you can listen to music and make calls with the push of a button.

We also have 2 gopros with us which have been capturing some pretty cool footage! This will be edited and put up soon, so keep an eye out for it! 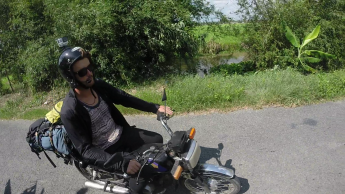 We headed out of Ho Chi Minh city to a big city called Can Tho which is located right in the Mekong delta. Ian needed to replace his sprocket before we left Ho Chi Minh It was a very nice place, we headed straight out of the city and to a hotel right next to the delta. We booked a boat tour for the next morning to see the floating markets. It was so interesting to see how people were moving these massive amounts of produce around with their boats.

We headed out of Can Tho towards Ca Mau. Matt’s bike decided it didn’t like one of the bolts holding his sprocket so he had to get that replaced, which ended up turning into a major and they replaced the axle and bearings but it cost 100,000 dong about $5 NZD it took about 1 hour. We made it to Ca Mau later that afternoon. We met a Vietnamese guy Tim who had lived in Auz for about 20 years, so he showed us around town that night. Took us to a really nice vegetarian restaurant, and we ate a proper amount of food. We missed out on lunch due to the break down. 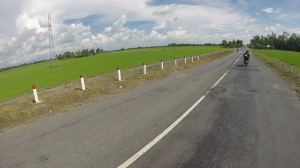 We left Ca Mau early in the morning to get a few Kms behind us. This time heading north. We figured we might be able to make it to Ho Chi Minh if we left early and had a good days ride. We got to the outskirts of town when Ian’s back break decided to snap. We managed to get it to a mechanic, but it took about 3 hours to fix. We just relaxed in hammocks across the road and had a cold drink. Matt met a lovely Vietnamese girl who basically saved the day and sat with us the entire time making sure we were all safe to continue on our journey. Once Ian was all fixed up we headed off once again. Until… Matt’s rear bearing, yes the brand new one, completely shredded so the bike was unable to be ridden. Luckily in Vietnam there is a motorcycle repair shop every 10km, but no one was willing to pick it up or fix it on the spot. Mainly due to our communication break down. Google translate just wasn’t cutting it that day. Long story short, after riding up and down the road and trying to find someone to fix it, Matt got pushed to a mechanic down the road and he managed to bash another bearing into it and got it working. Unfortunately while going off to swap bikes, my bike had fallen over and flooded the engine and broke my indicator! It was never ending that day I must say. We managed to find a place to stay that night for $4 NZD each, and ate dinner at an really nice restaurant close by.
This was the sun set from the restaurant. Made my day!

We got up early again, and we were on the road by 8am. After about 40min of riding, Matts bike decided to clap out again, same issue, this time we saw the problem was a bit more serious. He had to replace the rubbers in the inner wheel as well as get 2 new wheel bearings. The mechanic was far more onto it that other ones we have met. He tightened the chain which was ridiculously loose, and made sure everything else was in well working order

After that was all fixed, we were off! We made really good time to just outside of Ho Chi Minh, before the heavens opened. We pulled over in a cafe and had some lunch, then jumped in some hammocks. We fell asleep to the sound of pouring rain, I am not entirely sure for how long we were out, but the rain had stopped so we headed out once again. We stayed in the same hostel as last time and got the soon to be famous Gotcha burgers for dinner. 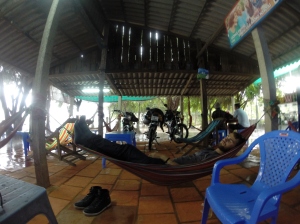 We left the city around 10am and headed off to our first stop on our northern journey. A small town called Mui Ne. The ride was filled with a bit of blissful, open highway and a bit of madness! People here who drive trucks, cars and buses are completely mad! They over take any time, on blind corners, when trucks are coming towards them, running motorcyclists like us off the road! We have some footage of some stuff, but by far not the worst. We have to be super careful on the roads here in general, but today was some next level stuff. We arrived safely at around 6pm and found a nice place to stay 2min walk from the beach. We decided to stay a couple of nights and check out the place. No bike trouble today! Almost.. when we arrived, Ian’s clutch cable decided to snap. We are still hoping from a trouble free day!