After 5 nights in the sleepy old town of Hoi An, it was time to move on. We passed through Da Nang briefly to visit the Marble Mountains, literally made up of a heap of marble. They had a tons of different sculptures you could buy there made from different coloured marble. Some of them must have weighed an actual ton! At the top of the mountain there were little temples, and caves with statues of Buddha. One of the caves was impressively large!

We headed up to Hue which was one of the most spectacular rides I have ever done! Up and and over a mountain range with breath taking views of the coast. Hue was Vietnam’s capital long ago and had plenty    of ancient buildings to see.  We booked a DMZ tour for our first day. It was a pretty big waste of time. We slept most of the day in the van as we drove probably 200km around the area of Hue and saw some old aircraft and tanks from the war, a cemetery and a bridge… so it was a bit disappointing as I was really keen to see all the old buildings instead.
The next day we headed to the forbidden purple palace, which was situated in a citadel within a citadel. Incredible old buildings with a very big Chinese influence in the architecture. 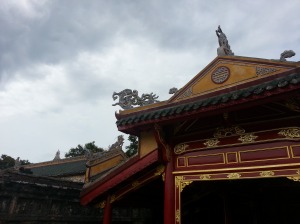 We left Hue the day after and headed for Khe San taking the long route up the Ho Chi Minh trail, it was well worth the ride. We have found the riding on the trail to be challenging and exciting!
We met a very friendly Vietnamese guy there who helped me get a new clutch for my bike, then invited us round to watch the soccer.

We headed up the Ho Chi Minh trail again the next day, and this was by far the best riding experience of my life! The roads were basically empty. We saw about 10 bikes and 6 vehicles all day. Check out the map to see how the road looks. 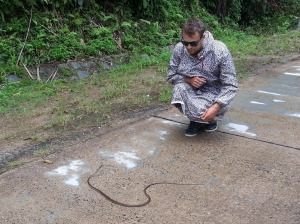 We spent 2 nights in Phong Nha which is home to some of the biggest caves in the world! And the land scape is breath taking. We checked out Paradise cave which has been lit up all nice, and the dark cave which turned out to be a bit of a muddy adventure. 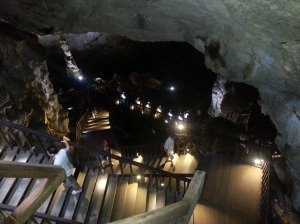 We headed up to a town called Ninh Binh just south of Hanoi. It was our biggest ride yet. About 500km in one go. That doesn’t sound like much, but when you are on the roads we put up with that day, it was a hectic ride! We went on a river tour. A “fake” version of the popular Tam Coc river cruise. But it was peaceful and very scenic. 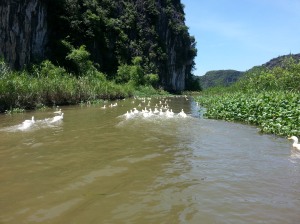 We are now on our way to Cat Ba, which is an island in the Halong Bay area. I’m looking forward to getting back to the beach! It has been far too long.

One thought on “From Hoi An to Cat Ba”