After my time in Milan i headed to Verona, it is a city of love, and the city in which Shakespear based his play Romeo and Juliet. It’s an old city with archaic buildings, a coliseum and plenty of castles. I wandered the streets with no real idea of where I was going, I stumbled upon Juliet’s grave at a beautiful house on the edge of town. I also visited Juliet’s house where hundreds of tourists packed in trying to get a photo grabbing Juliet’s breasts,  I must say I was no better. It was amazing to be there in such a historic place, it wasn’t much like the movie “Letters to Juliet” portrays the area, but it is still quite beautiful none the less.

I climbed up the hill that overlooked the city after fondling Juliet, it was a truly magnificent view. 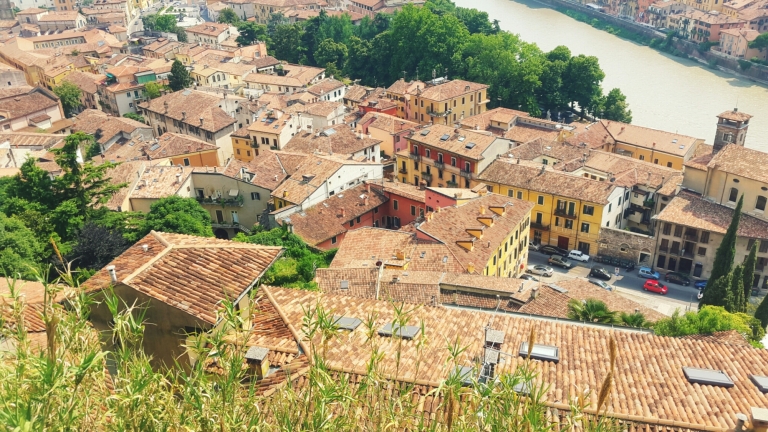 After a day in Verona I moved on to my next town. I went to Bologna where the Ducati factory was, unfortunately I needed to book a week in advance as they were super busy this time of year. So I decided I would have to come back later to see the factory.

Florence was next on my list and the furthest south I wanted to go before heading back to France. Initially I was quite taken back at the sheer size of Florence. It is a huge city! After finding a park I walked around for hours to see all the old buildings, I was guttered when I was told I could not see the statue of David as a school group had hired out the entire Galleria for the day, I thought that was a bit rough. The city felt much more dense and tightly packed in that other places in Italy, which gave it more of a claustrophobic and busy feel to it.

Pisa was only an hours drive away, so that was my next stop. It rained a bit in the afternoon which is quite a rare occurrence which made it quite nice, it lowered the temperature a bit which was good, it has been piping hot over the last couple of weeks, it is reminding me of my time in Asia!

The one thing that struck me about the leaning tower of Pisa, is (ironically) how much of a lean it is on! It’s really properly leaning over!